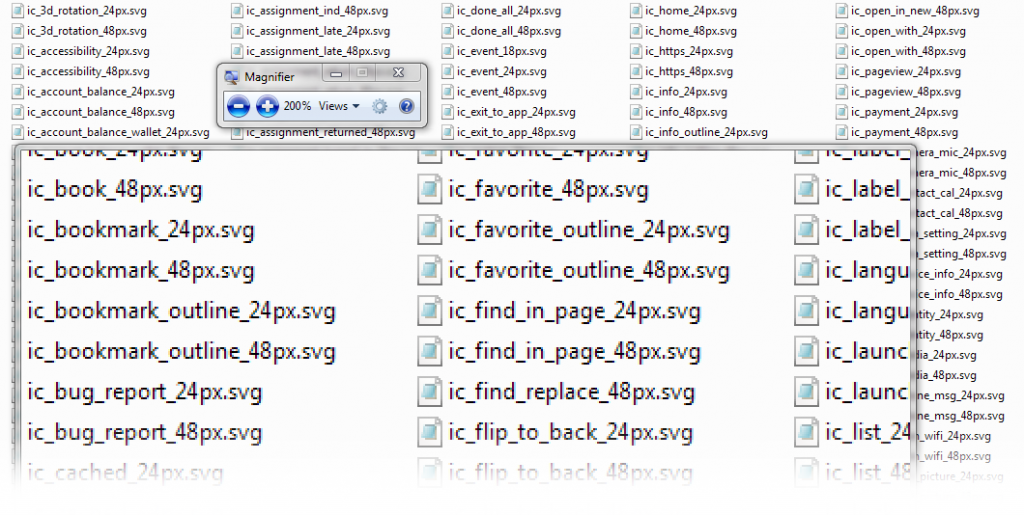 For the record I’m not 50 or 60 years old. I’m 40. My eyes are in great shape! I also know that in Adobe software as well as web browsers I can use the hotkeys CTRL and + and CTRL and – to make things larger and smaller (CTRL-0 resets to the default view btw). Though one of my own shortcomings (is that word?) was that I could never conveniently zoom in and out of the Windows file manager or explorer. Like anyone needs to do that, right?

Well, after being laid up on the couch for a few days with a major sickness I knew I should be able to somehow use my wireless keyboard with touchpad (which has proven to been a superb score) to do so. I can slightly make out filenames from 10 feet away, but it’s a strain.

Windows of course has always had a magnifier tool built in, but it wasn’t like I was going to go and load that, set it up, use it, and close it every time I needed to “zoom in” for a quick minute to find that right video file to play from my couch. Well let me tell you how pleased I was when I found out the process I was “needing” took but one keyboard shortcut, and one more when I was finished.

Yes, on my Windows 7 I can just use the Windows-key and the + to magnify a large area near the cursor, and then the Windows-key and Esc to close it… even if the magnifier application isn’t running! Almost the exact same shortcuts I was all ready using in my other programs, but now natively in Windows 7! Woohoo. The perfect solution for a sickie laying beat-up on the couch.

PS – I remember some statistic relating to Microsoft Office that stated something like 90% of what people requested be included in the next release of the program… was all ready there. The people just needed to spend a moment searching for how to accomplish what it was they wanted to do.